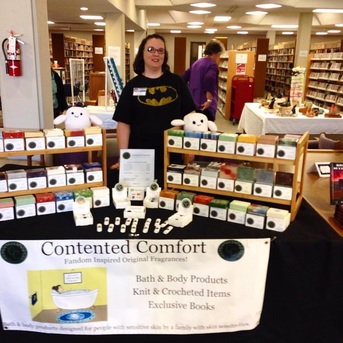 A. B. at YomuCon 2015.
I started writing a few months after joining the elementary band. It felt like learning to read music and play the clarinet opened up the creative spaces of my mind. Looking back, I'm almost certain it was more the fact I'd finally reached a point where dyslexia no longer hindered me to the point where relaxing into a story wasn't an option. The year before was the one where I hit grade level, and as soon as I could stop worrying about each individual word and allow the world to drop away, I found my first love.

I began devouring books. The more I read, the more I began to get ideas of how the stories might continue or should have gone. I began writing fan fiction, but it was 1991. I had no concept of what fan fiction was at the time, I just knew I had these ideas and wanted to get them down. My friends saw me spending any free time in class hunched over my notebook scribbling away, and they wanted to see what I was doing. Embarrassed, I tried to play it off as nothing, but they insisted. I let them read the stupid little stories I'd jotted down, and their reactions hooked me on writing.

About a year later, I got up the nerve to write down my first original story. It was just a handful of sentences and some roughly drawn pictures, but I was proud of it. I asked the school librarian about how someone were to go about getting a story turned into a book. She pointed me toward some books on the subject, but she also wanted to know why I was so curious. I showed her my rickety little, hand drawn and bound picture book. I expected her to laugh in my face, but she didn't. She asked if I'd like to put it in a special section of the library reserved for teachers to check out books to read to their classes.

I decided I'd become a writer "for real" then and there.

For the remainder of my time in elementary and all through middle and high school, I kept writing. I played with every genre and style I found. I tried horror, mystery, poetry, satire, non-fiction, fantasy, and science fiction. I entered contests and placed in a few. And I kept looking into ways to get my work published.

That first publication came my freshman year of college. One of the teachers I had for composition pointed me toward the college's literary journal. I submitted a poem and essay I'd written the year before and polished over the summer. Both were accepted, and that gave me the courage to keep submitting to the college publications and traditional houses alike.

I kept writing. With the help of the internet once my family joined the computer age that year, I joined writers' groups. I joined the college newspaper. I swapped my major from chemistry to English, for a multitude of reasons, and began taking a heavy load of literature and writing courses. The Writer's Hood accepted a couple of my short stories, and I became acquainted with professional editors and reviews.

All of those early publications were done under my maiden name, Roper. After I got engaged, I spent a few days contemplating whether or not to keep publishing under Roper or to change the name in the byline when I took my soon to be husband's name. Eventually "From the Ashes" was accepted by The Sword Review, and I earned my first paid publication, and first publication under A. B. England, the week before our oldest child was born. 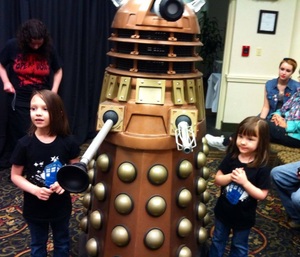 The girls at Con Kasterborous 2013.
Writing took a back seat for a few years. I even tried to give it up completely for a time after our youngest was born because I felt like I didn't have time to be a freelancer, mother, wife, and write at the same time. I didn't last long before I returned to putting words on the page. I was miserable otherwise.

Yet, I have a problem with boredom. If there isn't something providing a challenge, I get restless. It was during one of these restless spells that I decided to open Contented Comfort. Writing was slow for a few years because of all these other things going on in my life, but I kept plugging away at the various works-in-progress.

Ironically enough, I ended up taking a job as the traffic manager and admin for a couple independent talk radio stations while also running Contented Comfort before I finished Right of Succession. It was a story I started all the way back in early 1995, just four years after I started writing. All throughout high school, college, and the early years of my marriage I wrote, revised, and rewrote the novel time and again as I learned the craft and matured.

Things are still busy these days. I continue to design original fragrances, formulate bath and body products, and either knit or crochet various items for Contented Comfort. Chris and I homeschool our daughters because we are trained and equipped to give them one-on-one therapy for the dyslexia and dysgraphia inherited from me. Progress on the latest novel is slower than I'd like, but I'm determined to begin releasing a new one at least every twelve to eighteen months now that I have some idea what I'm doing.